Going Paleo: Eating What We Are Meant To

Home » About » Blog » Going Paleo: Eating What We Are Meant To

My name is Heather Graham, I’m 22, and I work at the Upper Valley Aquatic Center in the marketing department.  When I started working at UVAC, I was surrounded by people who were healthy or becoming healthy and seeing the positive changes in their lives.   Being from a family whose genetics are more of the ‘heavy-set’ type and always being of an ‘average’ type body myself, I decided it was time to make a change.
I started small by just working out in the gym a little bit, and eventually moved into personal training with the wonderful Katherine MacPhearson.  When I had my first PT session, I realized just how much weight I had put on.  I was 5’7 and 173 pounds; needless to say the freshman 15 in college was more like a freshman 30 for me.   Katherine suggested I try the Myfitnesspal app along with exercise to increase my weight loss.
So, I tried it and I became way too obsessed.  All I would talk about is calories, and it would drive not only me, but my boyfriend crazy!  I stopped Myfitnesspal, and tried to eat healthy on my own.
It was not going the way I wanted, and I became pretty discouraged because I could not find a solution that would work (I should mention I also do not have internet at home, so online trackers and programs were no help).  One day, Katherine started talking about this diet called Paleo or the ‘Caveman Diet.’   That day I went home and talked to my boyfriend, Chris about it and he was saying how he had heard of it from a co-worker as well.
The next time we were in town, Chris said let’s go to the bookstore and get some healthy cookbooks.  We bought our first Paleo cookbooks on February 2nd, and have been Paleo eaters ever since (with a few cheat days of course).
So what is Paleo?  Paleo is a lifestyle of eating that cuts out all the processed and icky junk that we are putting into our bodies, and leaves us with ‘what we were meant to eat.’
Paleo cuts out grains, dairy, soy, legumes, items with added sugar, processed items, and items that have a ton of chemicals.  It encourages you to eat as much natural, raw, grass-fed, and organic foods as possible, and the biggest portion of what you eat should be vegetables and meats.  The best part of the diet is that I do not have to worry about counting as intensely as I did before!  Paleo does give you some guidelines of portions and encourages moderation like most diets, but because you are eating the fats and sugars that are easier for your body to naturally digest and cutting out the junk, counting becomes a little less important. (If you are on Paleo and not seeing the results you want/can’t control your portions, you can still count of course). 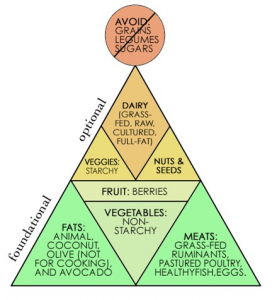 This is an example of how the Paleo food pyramid looks.  Notice dairy must be raw if consumed. You will find coconut to be the perfect food/oil/milk/sweetener for Paleo. Also, raw honey is a great sweetener in moderation, and spices are awesome!
So does it work?  So far I have lost about 10 pounds in a little over a month, and my boyfriend has lost 20 pounds (darn those boys).  That’s the most weight I have ever lost on a diet, and I still eat plenty of food (a.k.a I don’t feel like I am starving 24/7).  Paleo has encouraged me to keep going, and I am happier and proud of myself which is the best feeling ever.
I encourage everyone to try the challenge to go Paleo, whether you take it on full swing (all Paleo, all the time), a medium amount (like a whole30 challenge of 30 days of complete Paleo), or just a little (85% Paleo 15% regular diet) whatever you choose, just try it!  I will warn you that the first week is the hardest, but with Paleo and regular exercise (I try to do at least a hour 4 times a week if not more, but my boyfriend usually does not do any) you should see some results that will make you smile, and when your smiling you’re the prettiest you can be inside and out (handsome for those guys out there)!
Visit these links for more info:
www.Paleomg.com
www.Swisspaleo.com
www.blogger.com/purelypaleo (my blog)
You can find many more online too, just google Paleo!
Cookbooks Owned:
Complete Idiot’s Guide to Eating Paleo
Everyday Paleo: Family Cookbook by Sarah Fragoso

Join Us for a Day!

Become a member for the day!